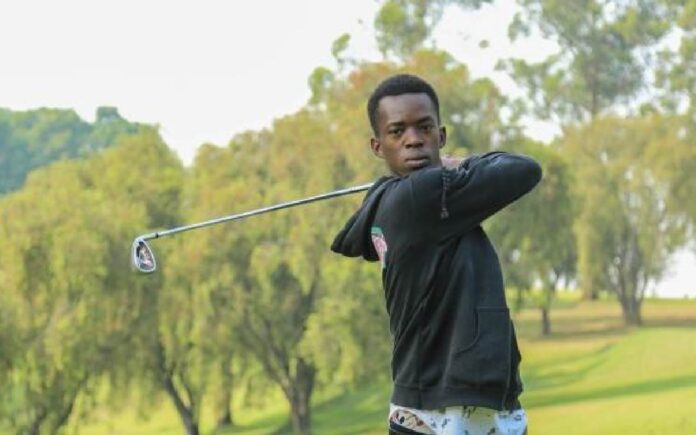 Allan Mugisha who studied from Ntare high school managed to take his school to East African hockey championship and he narrates having a great time while on Ntare hockey team.

However, this did not last long as he moved to Fort Portal where the game of hockey is so rare. Allan Mugisha came to the west to seek refuge at his uncle’s place after losing all his lovely parents and this meant the only person to lean on was his uncle.

On his arrival, he saw many golf trophies both new and old. He then asked his uncle Ndora Richard Kagaba whose trophies they could be and his uncle replied gently “They are my trophies.”

This was the beginning of Allan’s admiration. He wanted to learn the game so he then started by watching and reading about it in papers and online platforms after a period of two to three months, Allan read about Racheal Natukunda who was already his friend.

Then he asked her how he could also get the opportunity to join golf and Rachael told him that she was also in the same state as him. She had a lot of admiration for golf but she used to hear that golf is a game for the rich and cooperates only.

When Allan Mugisha came he met Coach Happy Robert who recommended him to talk to Isaiah Mwesige who is the CEO. Isaiah quickly felt a lot of sympathy towards him. He was told to come prepared to begin his golf lessons as soon as he could. Allan wanted yo begin that very moment.

Since then Allan Mugisha believes that the sport has changed his life because at AFRIYEA Golf Academy. It’s not just golf but the academy trains the whole person.

“This is a sport that some must play and I will play until my last breath. It has changed my way of life, discipline, hard work, cooperation, and socialization,” said Allan Mugisha.

Allan thinks that if the time he spent in hockey had been used for golf, he would be a world champion now because golf has got many opportunities to interact with people who have good hearts to support others.